Performance Management – Who Are You Talking To? 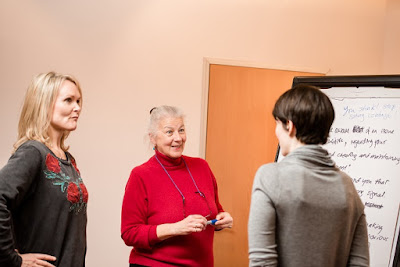 I talked previously about Performance Management and one of the key mistakes managers make which has to do with magical thinking: No one has to actually do anything and the problems will fix themselves and melt away.

Another crucial and equally unhelpful mistake is talking to the wrong people. Just about every manager I know - including me - has been guilty at some time or another of this 'misdemeanour'.

This is how it works. Someone on your team (let's call them Person A) does something you don't like, or is underperforming, or has rubbed you (or someone else in the team) up the wrong way. Do you then go and have a quiet word with that person to get it sorted out quickly? That would be the most logical and professional thing to do.

Unfortunately, too often, no you don't.

Instead what happens is that you talk to Persons B, C, D and so on, till everyone in the team is talking about Person A. Everyone knows what he or she has done 'wrong'; everyone has an opinion about A (he doesn't pull his weight, she's never at her desk, he's taking the piss, she never should have been hired in the first place) and then of course the inevitable happens: everyone begins to keep an eagle eye on A in order to rack up the evidence of their 'wrongness' till the case against them is watertight.

People's emotions get all stirred up and the gossip just feeds the situation and adds fuel to the fire.

What else is going on?

1. Assumptions. So far in this scenario everything is based on assumptions. Because A hasn't ever been spoken to and yet everyone else is talking about them, A hasn’t been given a chance to explain what's going on or to hear that their behaviour is troublesome.

When I was on the receiving end of this (in other words, I was Person A) the only thing I could say at first was, "Why didn't anyone say something to me?" I felt really hard done by and felt I was treated very unfairly because I had no idea people were so upset with me.

I then felt I had this major mountain to climb because everyone had made assumptions about my behaviour and even though I now knew what was going on, they continued to treat me as though all those assumptions were true. It was a very disheartening position to be in.

2. Emotions. In these kinds of situations emotions run high, especially when they feed on themselves instead of heading towards a resolution. However, it is usually, if not always, emotions that stop people having the quiet word with A in the first place.

What are you afraid might happen if you intervened right away? Person A might get angry, get defensive, point out things you've done wrong, cry, storm out. In other words, they might display big, potentially, overwhelming emotions that you think you can't or don't want to handle.

So you duck the issue of confrontation and off-load your frustrations and your own emotions on other people. This gives you a group of allies and because you're all colluding with the belief of how bad A is, you don't have to go inwards to investigate your own fears of having to manage other people's possible unpleasant emotions.

3.  It’s dealt with. Ironically, all that chatting to B, D, C and so on makes you feel as though you’ve dealt with it. It often comes as a shock that Person A’s behaviour continues because of course, Person A usually doesn’t have a clue all this is roiling around the office.

Part of the difficulty is that we are also dealing with human nature here. People like to gossip, they also like to have an odd man (or woman) out because it helps the rest of the tribe to bond - nothing like having a common 'enemy' to bring people together.

The baseline though is that all that babble is not only unprofessional, it is also immature and a form of passive aggressive bullying.

If A has been spoken to and repeatedly displays behaviour that isn't right, then there is a genuine Performance Management issue that has to be dealt with.

Sadly, A is rarely spoken to and thus the cycle continues on its merry way.

What can you do about it?

I cannot stress enough about nipping things in the bud. The longer you wait to take action, the more the chances are that B, C, D and so on will be drawn into the situation without A being made aware that there's an issue.

This is a simple 'model' you can try:

You to Person A (not in front of other members of the team, it can even be via email): “When you have some time, could we have a quick word please.”

Once you are face to face: "I noticed that you've been spending a lot of time on your phone (or whatever the issue is). My assumption is that you're making a lot of personal calls on company time.  I wonder if that's true or are my assumptions wrong?"

Give the person plenty of space to respond and then tell them what you'd like to see in the future, for instance, "I think it would be best if you used your break-time to make personal calls, rather than work time, or if you need extra time, just let me know so I don't feel you're taking advantage."

Letting someone know the assumptions you have made or even what their behaviour looks like to others is a way of getting stuff on the table so it can be dealt with.

Finally, you do have to clean up after yourself. If you haven’t caught things early and have off-loaded to everyone except the person involved, once you speak to A then you really do have to talk to all those B, C, Ds and so on so they know the situation is now being handled handled.

Posted by Impact Factory at 04:14 No comments: