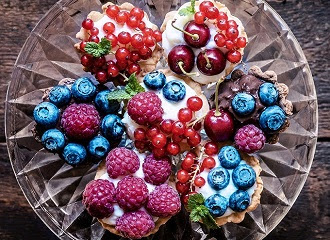 Have we ever had so much choice?  Whether it’s restaurants to go to, construction companies to hire, financial institutions to go to for their services, or even training companies to book with, we really are spoilt for choice.

Organisations are clamouring for our business and quite a din they can make, too.

On the other hand, if you are a businesses seeking new customers and ensuring you retain your current customers, how much of a din are you making and is it the right kind?

Businesses have to be so attuned to what will not only draw customers to them, but keep them returning as well.  It’s the extras that make a difference; the extras that appeal to our emotions by the way we are taken care of.

It’s common sense:  why on earth would you go back to any place that didn’t treat you well?  Obviously, we have to sometimes:  we’re locked into an iron-clad contract; it’s expedient to stay; it’s cheaper and for those on strict budgets, price may win out over customer care.

However, given that we, the customers, really do have a smorgasbord of choice, there are countless opportunities to please us, to take care of us, to stand out from the crowd through outstanding customer service.

This last is really important.  The number of times we’ve run Customer Service courses and heard delegates bemoan the fact that the way their customers behave doesn’t make sense.  We have heard many times, “Why can’t they see we’re trying to help?”

When people are in their emotions they can’t see.  Take care of their feelings, let them know you genuinely understand where they’re coming from and then they have a far greater capacity to hear what you have to say.

Make a bond with your customers and you will create trust; when you create trust, you rise above the clamour to become first choice.

Posted by Impact Factory at 08:11 No comments:

Public Speaking: Yipes! Everyone’s Eyes Are On Me 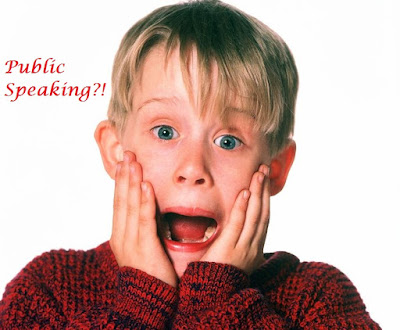 Why do we have Public Speaking courses as well as Presentation Courses?

They're the same thing, aren't they?"

On the surface, you might think so.  A lot of the principles are the same:  connecting with your audience, managing nerves, having a good solid central message, understanding the arena in which you are speaking, keeping your audience engaged and awake.

However, ask anyone who has had to give a best man's speech or was the key-note speaker at a conference or been invited to an after-dinner slot and I can guarantee they'll be able to tell you the difference.

Any form of presenting can feel very exposing, but public speaking can multiply that feeling of exposure ten-fold.  Why is that?

When you're presenting, you are usually presenting 'something' - a report, an update, new information, a change within the organisation, an instruction, a product launch.  You may be delivering information with loads of figures and graphs and often PowerPoint has a strong presence.

You are generally conveying information you want your audience to know and often you will want them to take some kind of action.

Whereas, when you're speaking in public it is indeed usually just you and your audience (thus that feeling of exposure) and your aim is to entertain (best man or after-dinner speeches, for instance), inspire and persuade (motivational speakers), exhort and urge (political speeches – shudder, shudder).

Great speeches such as Churchill or Roosevelt speaking to their citizens during World War II and Martin Luther King’s ‘I Have a Dream’ live on because of the incredible impact they not only made at the time but for subsequent generations as well.

Obviously, not everyone who gives a speech is going to be a Churchill or a King, but for anyone who is entering the world of public speaking or who wants to get better, there are some key elements which draw the audience in, make them pay attention and of course, remember what was said.


Presenters can certainly use any or even all of those elements to improve their presentations, however, they are imperative for a public speaker.

Posted by Impact Factory at 08:31 No comments: 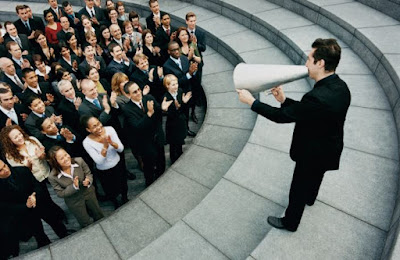 Even those with nerves of steel can feel as though they are facing a deep abyss into which they might fall when having to give a presentation.

Nerves can be crippling, debilitating and can undermine the best prepared presentation.

So what can be done about it?

First piece of advice:  Realise and accept that nerves are part of the deal.  There may be a few people out there who aren’t affected by pre-performance jitters, but they are rare and not like the rest of us who have butterflies or feel as though we want to throw up or even feel we might pass out.

The number of people is incalculable who we’ve seen over the years who think they are unique in their terror and that there’s something wrong with them, when their colleagues seem so cool and under control when they present.

Your terror isn’t you being a wuss; nerves are commonplace and if you look at the presenting arena in the first place, why wouldn’t you be scared:  standing in front of an audience (even a few people sitting around a table is an audience), all eyes on you, waiting…

Second piece of advice:  Believe that your audience is on your side.  Unless you have an arch enemy in the audience, people want you to succeed.  They want to be engaged, drawn in; informed or entertained, or both.  Since there are so many poor presenters out there, they want your presentation to stand out from the crowd and keep them awake.

Third piece of advice:  Avoid hiding behind PowerPoint.  PowerPoint has its place, and its place is to support you, not replace you.  The moment you give your slides top billing is the moment you hand control of your presentation to technology.  This is one of the most common presentation mistakes we see:  in order to manage nerves, people pack their slides with tons of information and hope that will do the trick so they don’t have to take centre stage themselves.  Centre stage is a really good place to be if you want to be credible in front of your audience.

Fourth piece of advice:  Take care of yourself.  Always keep a glass of water to hand and make use of it.  Mouths go dry when nerves are present, so keep sipping.  Reaching for the glass will also force you to move so you aren’t rooted to the spot.  Movement will also help when your nerves cause you to seize up which in turn causes rigid posture, which, in turn, will make it hard to breath.

Fifth piece of advice:  Breathe.  Taking deep breaths to fill the lungs is a really good idea.  Shallow breathing tends to exaggerate and exacerbate nerves and contributes to your feelings of dread.  A few deep breaths before you face the crowd really will help.  As will jumping up and down, swinging your arms, doing torso twists, side bends, knee lifts; anything to get you into your body and out of your head even for just a moment or two will make a huge difference to how you feel.

Sixth piece of advice:  Prepare.  And then prepare some more.  One of the best ways to help with nerves is to know that you are standing on a solid platform of preparation.  A contributing factor to those queasy jitters is not having done your homework.  That awful feeling that you’re going to be found out because you don’t fully know what you’re talking about.

Preparation includes getting your material in order and also practising, in front of a mirror, in front of a friend, in front of a sympathetic colleague.  If you try to wing it and you’re not too adept at winging it, get ready to plummet to earth with a bang and a whimper.

Seventh and final piece of advice:  Have fun!  Even with serious subjects, it can be hugely rewarding and satisfying to know you pulled it off, gave a terrific presentation, managed your nerves and enjoyed yourself.  When nerves rule the day, all you want to do is get it over with; when you rule your nerves, you are freed up to have a great time.

Check out Impact Factory’s range of Presentation One and Two Day courses and our Elite Five Day Presentation with Impact.

Posted by Impact Factory at 08:55 No comments: