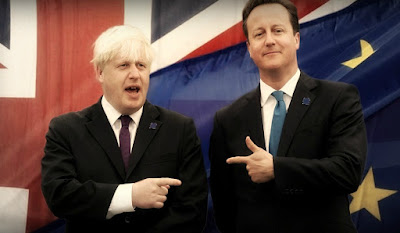 You also forgot about how change works.

Remain was basically selling the status quo with some tweaks.  They clearly didn’t ‘get it’ that a lot of people wanted some kind of change.

Leave got it and promised wholesale change when Britain would 'take back it's country' and there would be a return to the halcyon days of yore, whatever those were.

Impact Factory has been running change programmes for all of our 25 years of doing business, and one thing we can tell you is that for most people change is really hard no matter how much they think they want it; imposed change is beyond difficult; wholesale change is nearly impossible to maintain.

Promises win elections and gain votes; without a strong, wide-ranging plan, those promises will inevitably get broken and broken promises create cynicism, rage, more fear, and the need to blame.

We are definitely in the need to blame phase, alongside the chaos which will only continue to cause disruption unless something else happens (more on that below).

We are also unquestionably in the midst of chaos which may or may not calm down quickly.  The Pound is in free-fall, markets volatile there are predictions of businesses stuffing the Eurostar with their British holdings and heading for Europe, and Remain voters are checking out house prices in Scotland.

Indeed, we have already been approached by a European company who is now moving its manufacturing base back to the Continent and wants us to help with the transition.  They were waiting for the outcome of the referendum before making their decision and they have now made it quite quickly.

So here’s how it works.

That is what’s happening now.

Since this campaign was run on fear by both sides, the population has existed in a climate of anxiety for months.  The actual vote was a way of relieving that pressure and the aftermath of the outcome was the opportunity to put people's fear into a manageable state of being.

That hasn't happened and thus resignations, demands for resignations, in-fighting, nasty racist banners, vile notes shoved through letter boxes, increase in bigoted incidents.  Our leaders (sic) contradict each other:  We need to leave immediately; there’s no rush to leave.

Markets are unpredictable and unstable because they represent global fears.

Fear has not been quelled.  Fear has only been fuelled.

People who voted either way are now seeking some kind of ‘control’.  Lashing out at ‘immigrants’ is one form of control; signing petitions is another.

The paucity of leadership everyone is experiencing now only unconsciously encourages people to act to reassure themselves that the choice they made is the right one.  People can behave irrationally when they feel that their values and beliefs need defending.

Here’s what people need – this is the human nature bit:

We all need strong leadership now that:

Acknowledges what people are going through – on both sides of the ‘divide’
Allows others their point of view and doesn’t make them wrong for how they are feeling
Avoids telling them it’s time to move on
Manages people’s expectations realistically
Presents a plan that is comprehensible, believable and accessible
Looks for small changes that can be put into effect immediately

My fear is that you’ve blown it, guys.  My hope is that someone or a group of someones will wake up to what’s really needed to pull people together, and with compassion and care, make it happen.